A Muzungu Went to the Christmas Camp


For those of you that have been keeping up with us, you may have known that I was away from my family for the majority of the last week.  I took a group of boys and two other coaches from True Vine to a remote area of Uganda to compete in a very large football (soccer) tournament.  The tournament was run by an organization from Kampala called Watoto Wasoka.  PUR International was able to support a large portion of the tournament's expenses due to contributions to the campaign on our website.  Any team in the country is welcome to enter the tournament, and so we brought a team from True Vine's school, Victors Junior Christian School.  We call ourselves "Victor's Army".  All players, coaches, officials, and volunteers stayed at a boarding school in an area known as Mityana.  There were at least 55 teams that were separated into 3 categories, U11, U13, and U15.  We competed with the U15's.

In the US, U15 means "Under 15".  I found out that in Uganda it doesn't exactly mean that.  The categories are more separated based on size than ages.  Each category has a size limit based on a calculation of both height and weight.  Basically any boy that fits inside the range between the U13 limit and the U15 limit can play in the U15 category.  Most of our boys fit in the age range between U13 and U15, but based on size, I had at least 5 boys who qualified for the U11 category.  Needless to say, we were the smallest team in the U15's, by far.  It was discouraging for the boys at first, but we were able to use that as an opportunity to learn some good lessons.  We lost our first game badly (9-0) to a really talented team.  Still, they did not quit, and even though they were tempted to complain, they got past that and were able to enjoy the rest of the tournament.

The second day we did not have a game that was scheduled, but we were able to play a scrimmage game with the team that we bunked with at the school.  They were also in the U15 category, but we competed with them well.  The final score of that match was 3-1.  Still a loss, but our boys played well.  On the third day the boys were excited to play again no matter who the opponent was.  Again, the team was bigger and stronger, but the boys played very well, and we ended with a 1-1 tie.  After all that, we did not qualify for the round of 16 and did not advance past the group stages, but we definitely were able to end on a high note.  The boys were very proud and happy with the result.

On top of being able to celebrate some successes in the midst of what could have been viewed as failure, we had some amazing experiences.  For sleeping, we shared an empty classroom with a team from Restoration Assembly Church in Kampala.  Their coach, and their team were so great.  We held a Bible Study together with them in that room each morning to begin our day.  We had some really challenging experiences to get through as a team where the boys were able to learn some very valuable life lessons.  We had a lot of time to just hang out, get to know each other better, and just have fun.  I was very happy that it worked out to experience all of it together with this group of boys.  I look forward to doing it again next year, and by then we will be more prepared and know what to expect.

As I have said, I enjoyed the whole experience, and I am so glad that we did it!  With that being said, now I want to share some of my experience from the perspective of the spoiled "Muzungu" (white guy) just because I know that many of you will be interested.  If you are reading this, and you are from Uganda, please know that I appreciated the accommodations that were provided, it was just very different from what I am used to.

First, for two teams to sleep in one classroom was tight.  Everyone was sleeping two to a small mattress.  There was barely enough room for that, so I slept in the car to save room for others.  Also, there was no clean water to drink.  All the water came from 4 small faucets.  That was where everyone got their water for drinking, washing dishes, bathing, and anything else that it was needed for.  For food there was porridge for breakfast, and then porsho and beans for the other meals.  Porsho is a starch made from corn.  It is basically like grits with really fine grains.  The beans were very good.  The first night we ate at the school it was dark, and I ate them, and I enjoyed them.  The next day, when we were fed the beans again for lunch, I was able to look closer at them, and was able to see that there were maggots that had been cooked along with the beans.  I wanted to eat them along with everyone else, but I just couldn't.

(This is where I should have pictures of the food and the room where the boys slept,
but I'm not a professional photographer, and I only took soccer pictures)


Even though all of that stuff was uncomfortable for me, it was really good for me to gain some perspective.  Those conditions were nothing new to anyone there.  They were accustomed to it, and for many, the conditions were better than what they are accustomed to.  I ended up buying clean water for my team to drink.  I had also brought some extra snacks like cookies and bananas for them to eat.  And because I did those simple things, it was obvious that many of the other players viewed my players as the spoiled kids from the Muzungu's team (yes, the only other white person was a photographer from New York named Sam).

Even though some of that was hard, I am continually amazed at how welcoming so many of the people here in Uganda are.  When they see a Muzungu they usually offer a blank stare, but they are waiting to see some kind of evidence that communicates how I view them.  If I offer a simple smile and a waive, 99% of the time I am offered back a huge smile, a waive, and the best greeting in English that they know.  It is true that some people only respond so positively because they have hopes that I will give them something.  Some even approach me to ask for money, or for a job.  While I do make it a point to recognize that, I also recognize that not all of them look to white people for what they can get from them.  Many people here do have generous hearts, and have a desire to serve.  There are many people here that I have met, and that I have begun valuable relationships with, that have a Faith that amazes me, and that I can learn from.


It is true that I have come here to serve others, but it is also true for anyone that chooses to serve others, that you are Blessed beyond measure with experiences that cause you to grow both spiritually and emotionally.  Our time here is priceless, and we know it.  The experiences that we are having here are creating so much positive change in us.  It is our hope and our prayer that we are able to be a Blessing to as many people as possible while we are here.  That is our focus and our goal.  We appreciate each opportunity that comes for us to minister to others.  We give God the Glory for every life that is changed through what He is having us do here.  We also give Him the Glory and the credit for the change that He is doing in our own hearts.  We are so grateful.  We do not know what all the future has in store for us or for everything we are in the process of beginning here, but we do know that it is going to be Amazing! 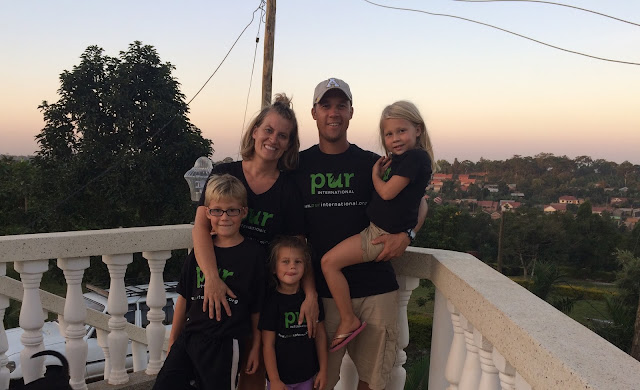 Thank you so much to all those who are supporting us in what we are doing here!  God is Good!  Happy New Year to all of You!  2018 is going to be the best year yet!